I came here on my own as a young lad to study business. My first impression of Newcastle - apart from the cold - was how quiet it was. Back in Ghana there are always more people on the streets and the sounds of car horns and music are unavoidable.

The only other Africans here in 1961 were fellow students and I felt isolated and homesick. In those days racism was different; personal abuse was less likely but I remember the boarding house signs: ‘No Irish, No dogs, No Blacks’. By the time I finished my course I was happy here and when a military coup coup in Ghana made it dangerous to return I decided to stay here.

I worked for the Civil Service for over thirty years before retiring. Since then I have given much of my time to promoting African culture and music and to supporting asylum seekers and refugees. I never forget how difficult it would have been if I had had to return to a country run by a military dictatorship.

From the beginning I adopted Newcastle United and used to love going to St, James Park. But in the 70’s the racism was so bad - this was the era when bananas were thrown at black footballers - that I stopped going. Now things are better, even though there are some people who don’t take the time to understand. I miss the atmosphere in Ghana but I like it in the North East; people are friendly and I have great neighbours. 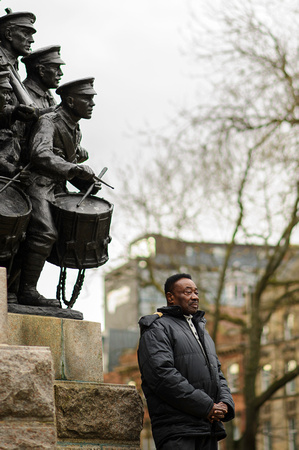